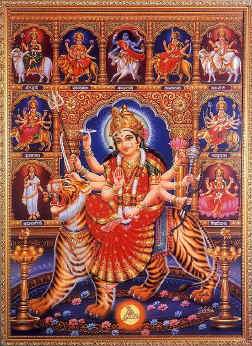 This holy story pertains to about 14th century AD. King ‘Manan Singh’ from ‘Chero’ dynasty was ruler of ‘Hathuwa’. Although Manan Singh was a devotee of Maa Durga but he was having a proud nature. He claimed to be the greatest devotee of Maa Durga and did not like other saints and religious persons. People were not happy with the King due to his unkind nature and behavior.

The fort in which the king resided was located at present ‘Thawe’. One ‘Rahashu’ lived in the same village who was a true devotee of ‘Maa Kamakhya’. People used to call him ‘Rahashu Bhagat’ to convey their respect to him.

Once there was a great famine in the state of Hathuwa. People started to die due to hunger. There was very bad condition everywhere, but the king continued to levy tax even in that miserable condition. Poor people became sadder due to the cruel attitude of the king. They did pray to ‘Maa Kamakhya’ for relief. To relieve her devotees from their grief and pain, Maa Kamakhya appeared in midnight while sitting on seven lions and told to Rahashu Bhagat to cut ‘Katara’ (grass) and to worship her in midnight. Rahashu Bhagat used to cut ‘Katara’ (grass) whole day and yielded it in midenight by seven lions of Maa Kamakhya. Thus he got ‘Manasara’ (a type of holy Rice). Every morning Rahashu Bhagat distributed the Manasara among poor people. Rahashu Bhagat became very famous because he had relieved the poor people from their hunger.

When the king came to know about all these developments, he became very angry and called Rahashu Bhagat and insulted him. The king ordered Rahashu Bhagat to call Maa Kamakhya to prove his true devotion.

Rahashu Bhagat requested the king not to do so and suggested the King to pray the Maa with an honest heart but the king insisted to call Maa and threatened Rahashu Bhagat to kill in case of disobedience. At last, helpless Rahashu Bhagat started to pray Maa Kamakhya to call her. On the call from her true devotee, Maa Kamakhya started her journey sitting on seven lions from Kamrupa (Assam) where she is known as ‘Kamakhya Devi’ to Thawe.

In her way to Thawe Maa stayed at Patna for a while and was called ‘PatanDevi’. Then Maa appeared in ‘Aami’ and ‘Ghodaghat’ was called ‘AmbikaBhawanii’ and ‘Ghod Devi’ respectively.

When Maa reached ‘Thawe’ the weather and appearance of the place began to change. Due to hundreds of thunders King’s palace fell and destroyed. Everyone was feared. The devotees of Maa started to pray her to save them as they had known that Maa had reached Thawe.

After sometime, Maa appeared through broken head of Rahashu Bhagat and showed her right hand wearing a ‘Kanagan’ (Bracelet). The four handed Maa appeared sitting on the seven lions and blessed her devotees. On the pray from her true devotees, Maa made the things normal and disappeared.

Rahashu Bhagat got ‘Moksha’ (heaven). The king, his palace and all his empire came to end. The remnants of the palace may be seen even today around the temple of Maa at Thawe.

The devotee of Maa built a temple where Maa appeared. They also built a ‘Rahashu-Temple’ where Rahashu Bhagat used to pray Maa. It is said that after ‘Darshan’ (visit) of Maa Thawewali, Darshan of Rahashu-Temple is mandatory to please Maa.

Maa is also called ‘Singhasini Bhawani’. Maa Thawewali is very kind and generous to her devotees and fulfills all their wishes.

N. B.: (This story is based upon the information taken from the people of Thawe. Maximum care has been taken to avoid any error, but if any fault would have been occurred, the writer conveys his ascent to amend it while brought to his notice. Your worthy suggestions in this regard are heartily welcome.)