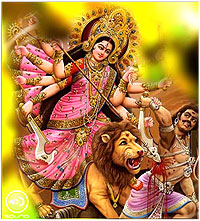 MAA DURGA is a ferocious form of Devi, the Mother Goddess, the all-powerful almighty goddess. Once the Gods could not defeat the buffalo demon Mahishasur, who was threatening the existence of the universe, the Gods were afraid of this water-buffalo bull because neither Vishnu nor Shiva could prevail against him. They begged lord Shiva for his assistance, and Shiva advised all the Gods to release their shaktis as it was seemed that the joint energy of shakti was only capable of vanquishing Mahishasur.

The shaktis of the Gods emerged in female form. Which arose a splendid Goddess with many arms, she was as beautiful as she was lethal andit was the ten-armed who went out to do battle.

The Gods called this Goddess DURGA, the invincible one. MAA DURGA was born fully-grown and is depicted as exceptionally beautiful and full of rage.

Gods armed her with all their weapons. Thus armed, MAA DURGA rode to the top of a mountain on a lion. In a bloody battle, she defeated Mahishasur and his army of demons and thus saved the Universe from this demon’s menace.

Therefore, MAA DURGA is also called Mahishasuramardini (the demolisher of Mahishasur). This holy battle has come to symbolise the triumph of Good over Evil.

DURGA PUJA is observed in her honor, to celebrate her victory over evil.